HealthySteps has demonstrated positive outcomes for children, their families, and the physicians and practices that serve them. 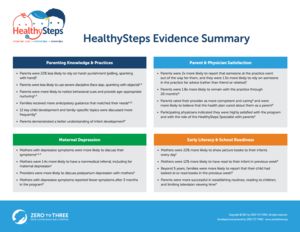 HealthySteps has significantly positive outcomes for children, their families, and the physicians and practices that serve them. That was the conclusion, published in 2003, of a National Evaluation of HealthySteps conducted by the Johns Hopkins Bloomberg School of Public Health Women’s and Children’s Health Policy Center. The evaluation, which studied 15 clinics serving more than 5,500 children and their families across the country and the economic spectrum, included both a randomized controlled trial (RCT) and a quasi-experimental comparison study. An accompanying Affiliate Evaluation showed that HealthySteps could be effectively delivered to low-income and high-risk families. RCT findings showed that by age two, HealthySteps children were:

The evaluations also found that HealthySteps families were more likely to:

It also enhanced the experiences of providers. Physicians were highly satisfied with the program and thought it:

Other research has shown additional outcomes: